Well, anyway, I left my house at 8:00 a.m. to go to the park.  It was bit hazy and less sunny comparing to the last few days.  Likely in this season, it was bit cold with some frost in the park.  Tits, such as Great Tit and Long-tailed Tit were seen together with Japanese Pygmy Woodpecker  on the way to go to the marsh.

Yap, there was a Solitary Snipe in the marsh.  It was feeding just about 10 meter from me.  Although photographers were bit nuisance, probably, nowhere else Solitary Snipe is so tame and easily seen in Japan.  The snipe is never uncommon in middle of winter in Japan.  Actually, it is more often seen in western Japan in small streams in hill station.  However, it is normally quite wary.  So, we just see when it is flushed.

A Common Kingfisher was seen in a small pond while a Brown-headed Thrush (probably race orii) was feeding on the ground.  In this winter, number of small passerine, such as Daurian Redstart and Red-flanked Bluetail is less than usual winter.  Although I heard call of Red-flanked Bluetail, I wasn't able to focus in it in the bush.

Recently, number of  Hwamei, an introduced species, has been increasing.  Although it is ecologically not good to see the laughing thrush, I am bit curious how they establish well in Yokohama. 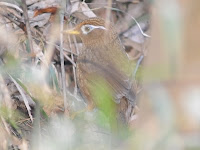 Posted by Eurylaimmus at 15:54 No comments: